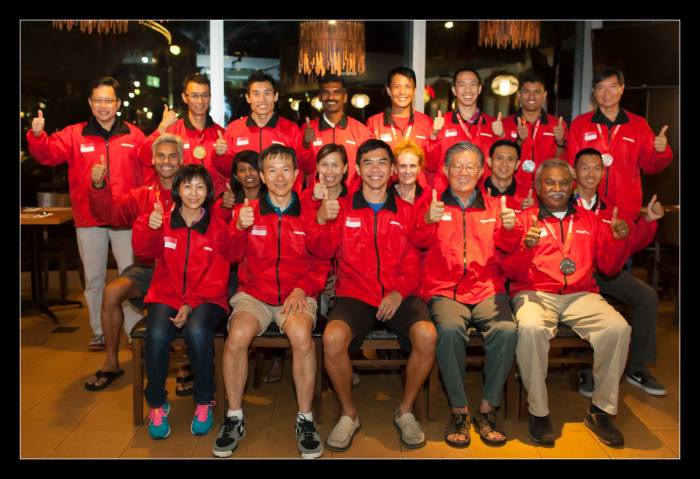 I have taken part in a few track meets before and have watched numerous of them live or on television.

I did not expect the Asia Masters Athletics Championships (AMAC) to be such a different experience. I certainly learnt a few things.

We were all younger than I expected. I thought enthusiasm was an inversely age dependent phenomenon but I could not be more wrong!

I witnessed the same enthusiasm among the masters class athletes, exactly like my younger self. At our team celebration dinner, I saw masters athletes of various age chatting away about their events, how they prepared for the game, etc. The energy level was exactly like the 15 year olds that I know in my running group, if not higher! 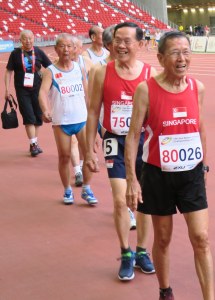 We always expect athletes to be younger.

Age is a matter of mindset rather than chronology. The mindset is not about the mind per se but it is about the competitiveness mind set. I saw an 81 year old athlete compete ferociously just as if he were an 18 year old. Put it this way – it is hard to take the competitiveness out of a competitive person. When I saw those octogenarians running their hearts out, I felt embarrassed by my own laziness.

Most track meets are over-represented by super fit people.

Master games are supposed to be age group competitions with the youngest age group being in the 35-39 year old range. Actually, it is not uncommon for people in that age group to even set world records! IMHO, the 35-39 age group is YOUNG!

However, I found that among the older masters athletes, the more competitive they are, and the older they are, they fitter (and slimmer) they look!

I was very lucky to have a big group of friends and family to cheer me on. Someone at the track quipped that I was the noisiest runner! That is really an honorable title to have. I did not expect, out of the blue, so many of my friends and colleagues would turn up on a hot Sunday morning to make sure I did not play truant. They deserve a big round of applause.

I also did not expect to see competitors from various Asian countries to cheer each other on, pretty much regardless of geographic boundary. There is a country medal table to show which country did better but the support on site was really without borders. That is priceless!

My personal circumstances is a little interesting. As I was from Hong Kong,  I was told to sign up for the meet through Hong Kong. However, I could not go through Hong Kong as I had no active track club membership as of 2016. Eventually, I was given a Singapore jersey to run for this beautiful country even though I am not yet a Singapore citizen. However, my understanding is that the team took me in as is!

One of my ex-cross-country teammates in Hong Kong asked how I felt when I was on the podium flying the Singapore flag. My response was – I am grateful and honored to be running in the red jersey. It has been a humbling experience all in all.

We all need help to grow up, don’t we? When I saw those 70+ year old athletes, I knew that there are a few more decades left for me to work on living a good life. However, the reality check was the moment when I saw that one of the athletes was using a hearing aid… Well, what was the big deal? A hearing aid is not as big a deal as a visual aid, and we never think twice when we see people in glasses, right? However, none of us could reach our point in life without help and support from friends and families around us.

In addition, I got acquainted with a few athletes from Hong Kong, China, Mongolia, Sri Lanka, etc., I have the deepest respect for them. It was a privilege to run with them.

Last but not the least, my colleagues, teammates, coaches, daughters, wives (sorry, typo here, WIFE… should be singular), family helper had much more fun that I expected.  I could not have asked for more.

Next stop: World Masters Athletics Championships in Perth at the end of October, 2016.

[Read Part 1, Part 2 and Part 3 of my posts on the Asia Masters Athletics Championships 5000m Gold]