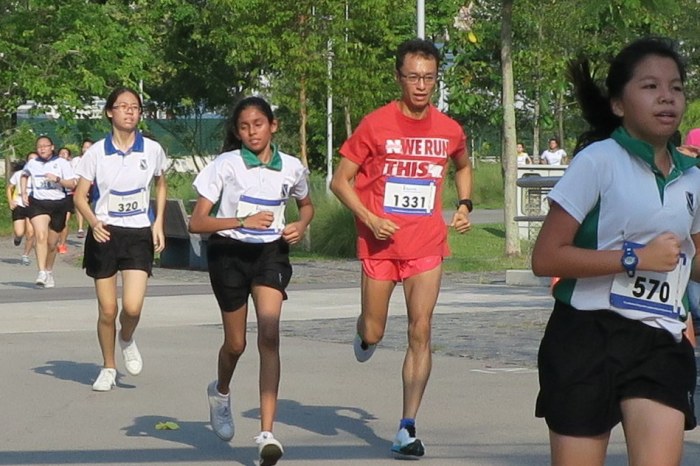 I attended my elder daughter’s school’s annual cross country race the other day. The event was held at Bishan-Ang Mo Kio Park, Singapore. The venue was beautiful. There was a nice running area, healthy grass, and a canal with much wildlife. I would not say it is breathtaking per se but it is a very pleasant experience being there. The race overall was organized very nicely. Efficiency is the other name of Singapore, I reckoned.

In Singapore, many secondary schools have their annual cross-country race and all students are supposed to take part in it except if there is a valid reason not to or if the kid is helping out in the event, for example marshalling.

My little girl had been looking forward to it for a number of reasons – she had made some small progress recently, partly due to the fact that she is having her growth spurt, partly she has been going out more under the sun and partly because she was under great coaching at FlexiFitness. With a little bit of luck and lots of effort, she came in top in her category.

My exercise/running journey was quite different from hers. I was in a school that was full of intimidatingly excellent basketball, football and table-tennis players. No surprise, my alma mater ruled in those sports at the highest school sports level during my student days. In the first year of my secondary school, I found that I was a skinny, small kid among the giants. I figured out I could not beat them and I had to do something different from the other boys, or else I would be lost in the crowd and end up being one of the wannabes… I found that no one liked running – all the ball players hated running long distance!! Since then, I worked on it.

There were some excellent runners in my school too but they were basically some of those super ball player boys who were running as a chill out workout… With some hard work, I was drafted into my school’s cross-country team in the second year. I attended all the training sessions in preparation of the interschool cross-country competition but I was basically stuck somewhere at the back of the pack most of the time. There were many boys who were better than me!

One morning I showed up for training and I found that NO ONE WAS THERE!!! No coach, no runners! Well, after waiting for a while, I changed back into my usual school uniform and attended classes. It was only later that I found out the team had gone off for the interschool and I was forgotten… (ok, no one was trying to be mean to me, they  had just forgotten about me…) I was disappointed but I was even more determined to stay ’in’.

The year after, on and off, I did excellently in the school time-trials but I never experienced any podium finishes when it counted. It was only by the O-level year (almost the end of high school) that I managed to get to the top at the school and interschool level. I was eventually invited to join the best track club in Hong Kong. Hard work only pays off after a long time. Sadly, I did not run for the track club due to my academic commitment. I had to do reasonably well to secure a place in the highly competitive university examination arena.

In contrary, my elder daughter got her first ‘results’ at the beginning of her high school life!!

When I started off working in North America, my schedule got out of whack! Life was just comprised of work and super-sized food. I only re-started exercising more than a decade after that around the time of the birth of my daughter.. and then once again in the past few years (See Part I, Part II and Part III of my weight loss journey).

It was my friend, Manson who re-kindled my running interest in 2011. It was my wife’s idea in 2014 to get my daughters running. After some systematic work, my whole family is now running and staying outdoors together many hours weekly. I would say that we all enjoy the new friends we have made along the way and we sure have enjoyed the change of pace from my kids’ school life and my career.

My family has more bonding time as a unit and we share some new common routines. This is a second chance to me! This is precious! One down side is that we all have a tan under the hot beautiful Singapore sunshine. I can swallow that.

The above are all the hypothetical situations… 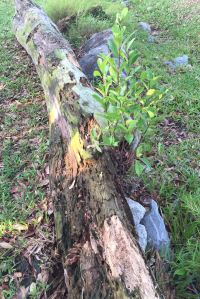 One more key to weight loss – It is precious to have a second chance!  Don’t let yours go away. It is priceless! Don’t give up something priceless that is yours. I know no one wants to be poorer, right? 🙂