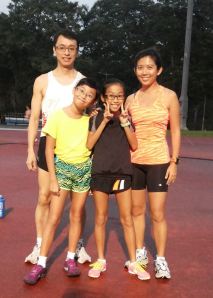 We have a new development in our family. No, no, no, my wife is not pregnant as far as I know. She is doing just fine with her life now with a new balance of leisure, family life, social life, and actively playing the role of mother and being my spouse. To that I am thankful and grateful.

The ‘new’ leaf in our family is that for the first time, we are all involved in running. It is hard to please everyone – in our small group of four, it is similarly not easy to please all of them too – we have enough disagreements on where to eat our weekend dinners!

My wife was not super keen on running to start with.  She was the one who made me write our home phone number on my hand for every run I did when we were living in Toronto, Canada (yes, we had no mobile phone then). That was her way of showing love and was for ‘just in case’ I dropped unconscious on the roadside, so that I would not become road kill. After we moved to Singapore, I stopped running due to kids, work commitments and other excuses. I think she was happy deep down when she knew that running was only part of my history in my earlier life, i.e. I had ‘recovered’ from being a lunatic.

Between my two young daughters, one was more in tune with swimming and the other was less into swimming, but after they had been swimming for the school for a few years, they wanted to try out something different but not running though. My wife, being a very capable negotiator, with whom I have first-hand experience with for many times, managed to get them to agree to just try out running. Just try. (this is my wife’s usual tactic and I have fallen for it countless times without fail…)

For a few years now, for the sake of motivating the kids (aka bragging from my side), I showed my daughters some of my academic and non-academic medals from time to time. Well, it is not like I could do many things well but I do have a small collection of medals and it was about something that I could do decently in the past.

We have joined the FlexiFitness running group for a few months now. Running together on the same track has proven to be a positive family experience. My three girls (daughters + wife) have started to look forward to the seeing the track. I enjoy the interaction with the other runners on a regular basis and love the feeling of wind on my face. Sweating like an animal and rolling around on a wet track to do core-exercise is great too as this levels out our gender, age, professions, etc.. We are all on the same ground of life and running. All that counts is how far we want to better ourselves.

I was particularly ecstatic on two recent occasions:

One night, I picked my two girls up from their piano lesson and walked home with them. As usual, we had our little chats. My younger daughter started by saying, “Daddy, no offence…”and I knew she was going to say something out of alignment. Then they told me: “Daddy, previously we had little interest in your medal history but now we know it is not like everyone should get medals.”

How time has changed that now we have ’finisher medals’ for those who bother to show up at most races.