(Part 1 of my blog on Taiwan can be found here)

Growing up in Hong Kong was a great experience. We had 9 years of free education. It was tough but not so tough that it robbed us of our childhood. Many of my friends who went overseas to continue their high school and university studies came back with flying colors. This probably reflected a change of study attitude and the strong academic foundation that was instilled in their younger years. However, we never realized that we were spared of one important responsibility – national service.

It was only during my later years in the dental school, when I started getting to know a few dental students from other Asian countries that I realized that young men from countries like Singapore and Taiwan had to serve in their army during their college age for a couple tens of months. I started to count my blessings.

I had no reason to visit Taiwan until recent years. However, I do remember those Taiwanese students I got to know through dental school meetings and post-graduate studies in the USA. They are all very one of a kind book smart.

I would say a few things made a strong impression on my family this recent Taiwan trip – the city and the food.

We were truly impressed by the variety of the food there. You name it and you can have any cuisine from mainland China and Japan (and beyond). Their uniquely Taiwanese cooking, as we tried out on one of our nights there with Dr. Jack Chang, was totally unique and delicious. My girls were also big fans of baked sweet potato and street side nibbles. Even a little look-see outing in a local convenience store turned out to be a giant collection of goodies for a late night family supper party in the hotel room! 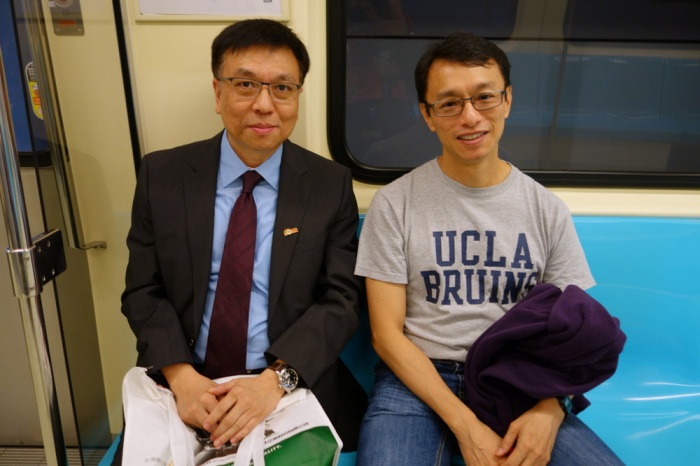 We took the subway in Taipei. Similar to Singapore, it is also called the MRT. My two little girls commented how hard it was to find trash cans on the street but, in sharp contrast to what one may assume, how clean the streets were! We hardly saw any trash on the street. Well, we were not talking about some very exclusive high-class neighborhood – we observed the same pattern in most places we went and this was also true at a very crowded night market too!

On more than one occasion, I witnessed people eagerly giving up their seats to elderly people on the subway and we almost never heard anyone talking loudly on their phone or to one another. One night, I witnessed two middle-age men with two big bags full of plastic containers chase after a recycling truck so that their recyclable trash would not be mixed with other domestic waste.

Together with Hong Kong, Singapore, and South Korea, Taiwan was formerly known as one of the ‘Asia Four Little Dragons’ in the 1980s. We have visited all these four places. Except for Hong Kong, the other three countries require their young men to serve in the army before university.

I remember during my first visit to Singapore, one of my friends commented on how cool it was to play with the armory but an older Singaporean professor calmly said, “Our hope is never to use those tools.” As far as I understand, civic education is a big part of any army training. When 50% of the population is exposed to that, powerful and meaningful change will happen in the society in the long run. Apparently, those intangible tools are working wonders even in peaceful times. We need this more than other hardware.