It is conventional wisdom that that one should do no more than 2 marathons a year or 3 marathons in two years. Biology dictates that it takes about 2 weeks to fully recover physiologically from a full effort marathon run. A training cycle of approximately 12 weeks is considered minimum training period.

In the last few years, I made it a point to run the Standard Chartered Singapore Marathon, as it is on home court. In addition, I also tried to run the Standard Chartered Hong Kong Marathon, as it is held in my home town. The Singapore Marathon always happens in the first week of December and the Hong Kong Marathon always happens around February after the Chinese New Year.

I received a call on the afternoon that I flew off for the Hong Kong marathon. The caller was Mr. Steven Quek, a famous coach whom I had heard of but never managed to meet in person. The New Taipei City Wan Jin Shi Marathon had invited Singapore Athletics (SA) to send a representative to run there. SA figured out that I should be one of two runners to receive the call! This New Taipei City marathon was scheduled for March 17, 2019. My immediate reaction was, ‘No way – I am not running two marathons in a month!” The more I thought about it, I realized I was dead wrong – the 2 marathons were not a month apart – they were 28 days apart!

The last time I had an opportunity close to this was back in 1982! I did reasonably well in the under-17 Interschool Cross-country in Hong Kong but missed out in the selection during the subsequent race. What happened? I outran myself badly and was not even close to being selected while two of my other teammates made it. After some soul-searching I decided it would be silly to forgo the SA/Taiwan invitation.

The one-month gap between the Hong Kong and Taiwan marathons was difficult. Very few people had tried running two marathons within such a short time and I had no clue. Luckily, my friend T-Rex (aka Jeremy) had done something similar – he had run the New York and Osaka Marathons within a span of 3 weeks! He gave me a great training idea for such a race schedule – Let it go and do little!

New Taipei City is about an hour away from Taipei city, I almost mixed them up! Luckily, the organizer did a fantastic job of picking me and my family up from the Taipei International Airport. Wanli town, where I was staying, was scenic. There was a non-stop sea breeze, a world-famous seaside Geopark within walking distance of the hotel, and we settled down in no time. However, a race route 99% along seaside, interesting geography (rolling hills) and non-stop breeze (high sea, strong wind) are all NOT in favor of a good/easy run. I sat at the hotel restaurant for lunch the day before the race and I thought to myself – this place is perfect to fly kites… may be for the next trip.

Fortunately, the wind calmed down a little on race day. It was just a little cold and about 95%+ humidity. I survived the run, and came in 50th place overall, and 3rd in my age group. I learned to respect the hilly terrain and sea breeze. 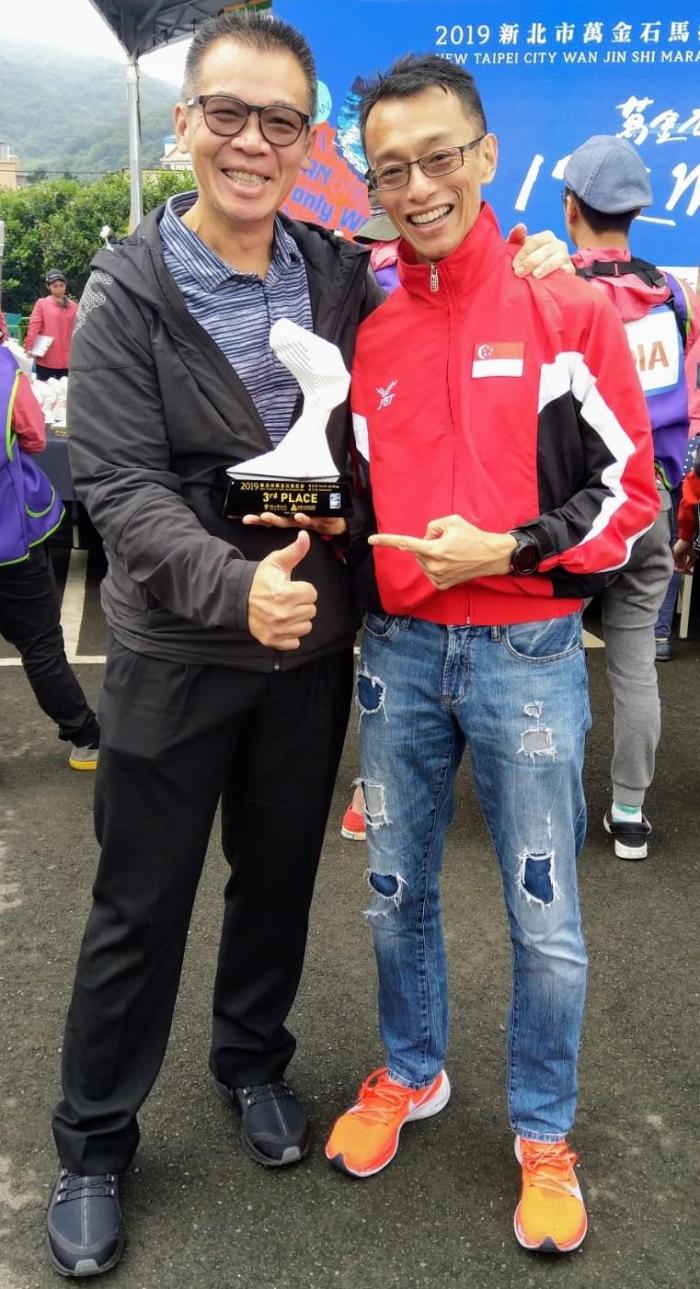 I was certainly overjoyed to see Dr Haston Liu and my family at the finish line. Haston was 2 years my senior at the University of Hong Kong Dental School and he is currently the President of the Hong Kong Dental Association. He is not just another president – he represented Hong Kong in the 1986 Asian Games (rowing) when he was a third-year dental student while I was a freshman. He has been and is still an active all-rounder sportsman, cyclist, runner, triathlete, and dentist. It has been always refreshing to chat with him and pick his brains.

The trip rounded off with a nice gathering of Northwestern University Taiwan alumni. Having extended families and friends certainly makes life more meaningful. Who cares about a trophy or two? I care more about my time off from running … before training resumes.