Marathon Man is a movie that has little to do with a marathon. I was a runner during my school years and have been running semi-regularly for a while. Even though I have never run a marathon in my life, I am always intrigued by marathons. I have always had a healthy dose of fear and respect for the distance. While I never think I am in a position to run a full marathon, I have been avidly reading about it, watching it and mesmerized by it.

I was totally elated when a question in sports physiology appeared in my first year dental school final examination. I knew I had an unfair advantage as my other book smart classmates had far less ideas on the topic than I did.

2015 is the 50th anniversary of Singapore and the Southeast Asian Games (SEA) is being held here this month. One of our Singaporean running friends, Ashley Liew, ran the marathon for his motherland. To me Ashley is a big boy because he is 20 years my junior in terms of age and he has the broadest smile in Singapore. In this smile issue, I know EXACTLY what I am talking about.

It took a few fast runners (in a relay manner) from our group to pace Ashley on his 15km training run the other day. None could really keep up (well, as you might have guessed it, I was not there !) 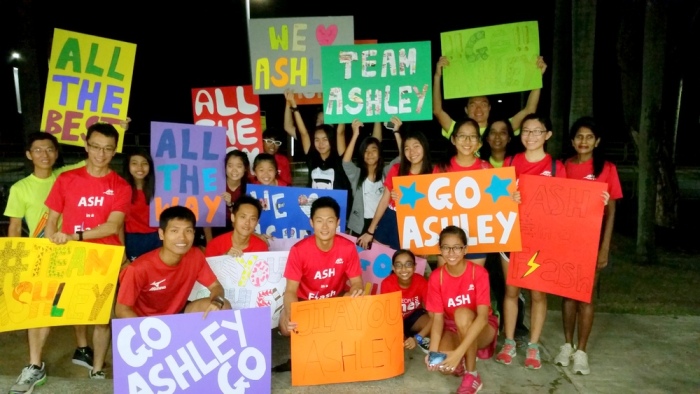 The SEA Games Marathon was held on June 7, 2015 at 6am. For the first time, my wife and I decided to join our running group and stay along the race route to cheer for Ashley. We woke up at 430am and made our way to the meeting point. We were probably the biggest contingent cheering for any individual marathon runner and mind you, I am a conservative guy who never had done this in my life.

As the run was over 2 hours long, with some automobile assistance, we managed to station ourselves at various points along the route to cheer the runners, specifically, Ashley. It turned out that the weather went south and a heavy downpour started at about half way through the race. Well, it is all fair as all competitors were running under the same weather conditions.

When we reached the finish line, we missed the top finishers – they were too fast and had outran our car.

Soh Rui Yong was the Singaporean gold medalist – he finished ahead of the second placed competitor by out running him in the last 250m, which created a gap of over 10 seconds. Clearly, Soh destroyed the second placed runner. (Watch the video at the following link from 10:15 onward if you are interested)

This reminded me of the 1983 Fukuoka marathon duel finish between Toshihiko Seko and Juma Ikangaa. Both were great runners and Ikangaa was known for being a lead runner. Mr Seko, with capability of running 800m in 112 seconds as a teenager, did something absolutely stunning in a similar manner like Soh in 2015 SEA Games Marathon. (watch from the moment 3:00 onward)

Our big boy Ashley finished in 8th place with a respectable personal best time in Singapore. With better scientific evidence in sports and physiology, now we know that marathoners never reach their full potential until they pass their 20s. Ashley is simply early in the game. I am waiting to see the big boy grow into a big guy and by then we will see that animal being unleashed. Stay tuned.