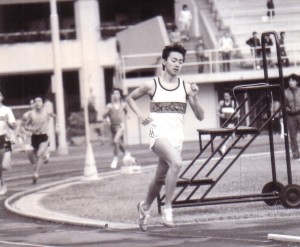 Time is something no one can work against. As far as we know, there is no time traveler in the history of mankind yet.

On more than one occasion, I have dreamed of the good times I enjoyed when I was running with my high school cross-country team. That mixture of mental suffering and physical pain was part of the resulting joy of running cross-country. The happiness of running together as a team was precious too.

Jo Pavmey is a mother of two. Her younger kid was born less than a year ago. At age 40, the British runner won the female 10000m event at the 2014 European Championships. She literally outran runners half her age to win the gold medal.

Another runner in the Euopean Championships representing France, Mahiedine Mekhissi-Benabbad, was disqualified after he crossed the finish line ahead of the field in the 3000m steeplechase event. The reason was that he took his jersey off in the last 100 metres, which violated the IAAF rule that the number bibs needed to be displayed at all times during the competition. This was probably a penalty for ‘un-sportsman-like behavior’ and being disrespectful toward his fellow competitors while the event was still ongoing.

In 1982, I was running in the age 16-17 school division 1 interschool Cross-country race in Hong Kong. It was a very cold day by Hong Kong standards, probably about 5 degrees celcius. Our school team did not fare well that day on the grass track. Following our 6.5km run was the 18-19 year old boys run. It felt like forever after they were gunned off but we were busy checking out runners from the other girls schools. After about 20 minutes plus, far from the horizon at the Fanling Golf Club, a few fast runners emerged. It was a few Caucasian boys and one Chinese boy. As they dashed toward the finish line, it was clear that the Chinese boy (his name was similar to mine and he was known by his nickname as ‘Din Chung’ aka Crazy Chung) was approximately 10 meters ahead of the gang and he was effortlessly running while wearing a big smile. This boy was a record holder in 1500m and 5000m on the track in various age groups. He later went on to represent Hong Kong as a middle distance runner in the under-19 age group.

‘Din Chung’ was certainly in a class of his own. The other boys were no competition in that cross country run. A few metres before he crossed the finish line, he kicked even harder, punishing the other runners and then he did something unbelievable – he turned his head around, put his hands next to his ears, stuck his tongue out and made a face to the other boys behind him while sprinting even faster. As usual, he crossed the finish line first. He truly lived up to his reputation of being a little unpredictably crazy.

Spring 1983 recorded the highest level of rain fall in 20 years in Hong Kong.  I had a great training program and a few excellent training buddies from my cross-country teammates. Some of my training partners from the cross-country team had the speed of sprinters and some were sprinters who could last the distance like middle-distance runners. In the March 1983 interschool game, I attempted to break the 1500m record of ‘Din Chung.’ It turned out to be a disaster for me as I almost did not finish and had to settle for a second place. I outran myself badly.